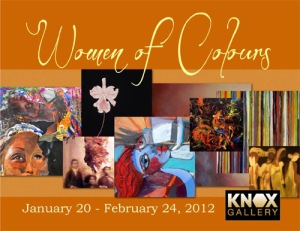 Yohance:  This is the second exhibition that you’ve participating in at the Knox Gallery. What is it about that space the keeps you interested in showing your work there?

Omo Misha:  Knox Gallery is a beautiful space and I feel honored to have been invited to get involved on the ground level. The gallery, however, is a product of the vision of Charles Knox, realized with the artistic expertise of Al Johnson. It has been a privilege to work with both Knox and Al in this capacity. I feel very much a part of this family and look forward to making creative contributions throughout the life of the gallery.

Y:  What exactly are your responsibilities as a curator for an exhibition?

OM:  As curator, I selected the artists as well as the works of art to be shown in the “Women of Colours” exhibit. Curating also involves determining how works will be presented within the exhibit, and coordinating the receipt of all deliverables, etc.

Y:  What was your inspiration for “Women of Colours”?

OM:  Al Johnson introduced the name of the show. I allowed the name, and how I interpreted that, to guide the tone of the show. The color of something is the appearance it has as a result of the way in which it reflects light. So I thought about selecting artists whose work reflected vivid, strong, intense or brilliant, hence colorful, ideas. Also, I used the universal spelling of the word “colors” – with a u – as I felt that it added breadth to the word, and also to show that this would be an international conversation via the arts. America is the only English-speaking country to spell the word colors without the letter u, and with so many people in New York coming from other parts of the world, I wanted the public to know, even in small ways, that this would be an all-inclusive presentation.

Y:  What was your process for selecting the contributors for “Women of Colours”?

OM:  I looked for artists who told clear, unmistakable stories through her art and whom I felt had commanded her medium with precision. I wanted to use this opportunity to pull together some of the most prolific artists I knew, whom I thought made bold statements (about a wide variety of subjects) through their work. I wasn’t looking for the art to reflect any particular theme, but for each artist to speak to something that resonated strongly within her own heart.

Y:  Had you worked with any of these artists in the past?

OM:  Yukako and Ruth Llanillo Leal are the only artists in the show I had actually the pleasure of working with before. I had relationships with Grace Williams, Noreen Dean Dresser and Klode Garoute and was grateful for this opportunity for us to finally work together. I was familiar with the work of both Mira Gandy and Lisa Ingram, recently met both of them and was thrilled that they were able to participate. And, although Gigi Boldon and I are both from Detroit and share many mutual friends, we had never actually met in person before she arrived for the show. So, it was a great joy to be able to introduce Gigi and her work to the New York artistic community.

Y:  The pieces on display have such a varied aesthetic, what binds them together?

OM:  I tried to put together artists who had distinct styles of working and distinct voices – so thank you for noticing the “varied aesthetic.” Whether the works tell stories of history, spirituality, nature, sexuality or resilience, it is the strength of the voice behind each body of work that binds these pieces together.

Y:  In your opinion, how does the female voice in art differ from the male voice?

OM:  As a female, it is probably hard for me to answer this question objectively, but I feel that we approach most things with more thought and sensitivity, including art-making. While there is a certain sensitivity that artists have anyway, which allows us to create art, with women being naturally more in touch emotionally, it allows for deeper expression and exploration in the work. Work created by women always seems to have an extra dimension to it….

Y:  When did you discover your own artistic voice?

OM:  I have always been an artist, although I have expressed that throughout my lifetime in many forms. I began painting, seriously, in high school however, took a long break and just started back again in 2006. During that break, for about 15 years, I was engrossed in jewelry-making and other creative expressions.

Y:  What personally inspires you when you’re painting? Do you have a muse?

OM:  I am inspired by life stories. My primary work is portraiture, and my subjects are usually individuals who have captivated me with their stories. I try to retell those stories, as I understand them, through their portraits.

Y:  Do you express yourself through any other artistic mediums?

OM:  I write. I have also been making jewelry for most of my adult life.

Y:  Which medium is your favorite to work in?

OM:  Writing is my first love.

Y:  You also work as an art educator, what would be your advice to an aspiring artist trying to find their voice?

OM:  Just to stick with it. Each work will be better than the one before. The more you do a thing, the better you will become.

Y:  What are you plans for the future?

OM:  I have two more major exhibits I am curating this Spring, including “Nature’s Return” – which addresses environmental concerns, features the work of 15 artists, and opens at the Arsenal Gallery (NYC Parks Dept.) on March 7, 2012.

The other is “BLACKBALL: Illuminating Negro Leagues Baseball ” – which I am curating on behalf of the Harlem Historical Society and Abyssinian. We are looking at an April 2012 opening date for that show with more details to come.

As Program Director of the Arts Horizons LeRoy Neiman Art Center, we also have many wonderful youth and general programs and exhibits coming up throughout the year. You can keep up with this work at www.neimancenter.org and follow my personal work at
www.OmoMisha.com

A Harlem resident and native of Detroit, MI, Misha McGlown began painting professionally in 2006 and has since exhibited throughout the New York area; including her first solo exhibit, presented by Columbia University (2008). On behalf of artHARLEM, Misha also had the opportunity to curate EVOLUTION: The Changing Face of Harlem – an exhibition hosted by Columbia University and featuring the works of 25 Harlem artists. Misha is currently Curator-in-Residence for Harlem’s Café One and recently coordinated Harlem “Artists on the Square”, a weekly artists market produced by Harlem CDC and Empire State Development Corporation. She currently serves as Program Director for the Arts Horizons LeRoy Neiman Art Center, has affiliations with Symphony Space, Harlem Arts Alliance, and ArtCrawl Harlem, and has worked in arts education for a host of Tri-State area youth service agencies.

Misha has been featured on HGTV, National Public Radio and in numerous local and national print publications; has executed public art installations on behalf of the Harlem River Park Task Force and the 125th Street Business Improvement District (2010-2011), and; has been awarded artistic grants by the Lower Manhattan Cultural Council (2011), Puffin Foundation (2007, 2010) and Harlem Arts Alliance (2008, 2009). A multi-faceted artist and visionary, she is a also a published author and creator of The Omo Misha Times – a web ‘zine covering art, fashion, politics, fun and funky web finds.

The “Women of Colours” exhibition will be showing at the Knox Gallery until February 24, 2012. For more info click it.