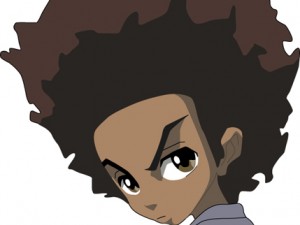 One of the most memorable times in a lot of people’s childhood was spending Saturday mornings watching their favorite cartoons. As we get older we become less inclined to tune into programs featuring animated characters, but the truth is cartoons aren’t just for kids. The same way grown folks have comic strips like Doonesbury, Dilbert, and Cathy that reflect the trials of adulthood, there are plenty of animated television series that are just as sophisticated and satirical as any newspaper political cartoon. Some are better than others, so here’s the best of the best. DZI:The Voice countdowns the top ten animated shows for grown ups.

MTV’s Beavis and Butt-head may be that channel’s most famous cartoon show, but it was it’s spin-off, Daria, that tapped into the perfect animated representation of surviving high school. It seemed that no matter what social status the viewer held during their teenage years, everyone was able to relate to the outsider tag of the sarcastic, subversive title character who routinely proved that she was even more acute than the adults in her world. This connection with the audience was mainly achieved because despite being trapped in the Surburban abyss of her disconnected parents, clueless sister, and superficial classmates, Daria proved that no matter what age you are, it’s still always cool just to be yourself.

Take a little Mad Men, mix it with a pinch of The Office and Get Smart, and then top it off with Arrested Development, and you’d get FX’s animated comedy about a quirky family owned business. It just happens this family business is the International Secret Intelligence Service – an interesting template for a comedic take down of Corporate America. Centered around master spy Sterling Archer (think more Agent 86, less 007), the ISIS spy company’s cast of misfits, like Archer’s maniacal, self-absorbed mother Malory and his ultra-violent ex-girlfriend Lana, all try to co-exist in an environment full of awkward hostility and obvious resentment. Creator Adam Reed’s use of ironic one-liners and anarchronstic pop culture quips will have you laughing so hard you’ll completely forget you’re even watching a cartoon.

Mike Judge and Greg Daniel’s comical look at Southern middle-class family life became one of the most successful cartoon programs in television history. King of the Hill is currently the third longest running prime-time animated series of all time, and during it’s run the show won Emmy awards for Outstanding Animation (1999) and Outstanding Voice Over (Pamela Aldon; 2002). Set in the fictional town of Arlen, Texas, KotH follows the conservative Hill family made up of the hard working patriarch Hank, loving-but-naive mother Peggy, and 13-year-old aspiring comic Bobby, along with their eccentric neighbors. The testy, but caring relationship between Hank’s uber-masculine, jock persona and Bobby’s sensitive, artistic mindset was the perfect examination of the shifting traditional gender roles in modern America. 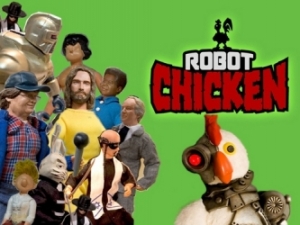 Born in the spirit of classic sketch comedy shows like Monty Python’s Flying Circus, Saturday Night Live, and In Living Color, Adult Swim’s Robot Chicken uses stop motion animation to lampoon the many absurdities of pop culture. Show creator and voice performer Seth Green has parodied everything from Star Wars and Toy Story to The Biggest Loser and Coca-Cola. Robot Chicken‘s endless cast of popular action figures and claymation dolls often find themselves in unfamiliar situations which creates great opportunities for comedic gold. But what’s the deal with the title Robot Chicken? The opening sequence (a homage to Frankenstein and A Clockwork Orange) suggests that the impressionable, mindless machinery being referred to may actually be the person on the otherside of the screen.

Adult content isn’t usually the first thing to come to mind when programs from the Nickelodeon channel are mentioned, but Ren and Stimpy was a groundbreaking cartoon because it introduced television animation to mature off-color humor and sexual innuendo that most likely went over the heads of it’s intended tween demographic. The neurotic behavior and graphic violence depicted by the hyperactive Ren Höek and the simple-minded Stimpson J. Cat inspired later cartoons like Beavis and Butt-head, SpongueBob SquarePants, and South Park. Show creator John Kricfalusi tried to push the envelope even farther by producing the Spike network’s spin-off, Ren & Stimpy “Adult Party Cartoon”. The dark humor and crude language forced the revival off the air after only one month, but the legacy of the original R&S lives on as one of the most influential cartoons of the 1990’s. 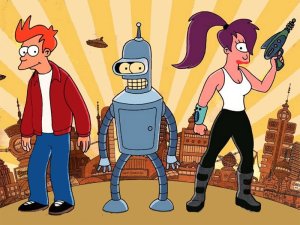 Ever pondered what life may be like in the 31st Century? Famed animator and television producer Matt Groening gives his perspective of life 1000 years from now in his Comedy Central hit show Futurama. Apparently, in the year 3012 New New York will be inhabited by cryogenically frozen delivery boys, kleptomaniacal robots, one-eyed mutant pilots, genius centenarians, and the living heads of former presidents floating in jars. Sound crazy? Well, the future may not be that different from the present. One of the main themes of Futurama is that the same pressing issues that mankind has struggled with since the beginning of civilization unfortunately don’t get solved by the advance technology of the next millennium. In Fry, Bender, and Leela’s world discrimination, political strife, and economic inequality are prevalent factors in society. Sound familiar? 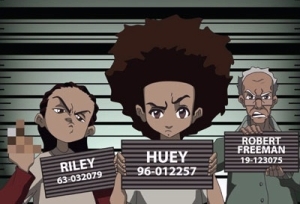 Imagine the culture shock for two African-American pre-teens (one a black revolutionary, the other a wanna-be thug) from the inner city relocating to an all white exurban neighborhood. Actually, there’s no need to create the scenario in your mind, because Aaron McGruder perfected the experience with his critically acclaimed series The Boondocks. Originally a comic strip in the University of Maryland school paper and later syndicated in newspapers across the nation, The Boondocks’ conversion to television maintained it’s snarky critique of politics, racism, classism, homophobia, and everything involving modern black culture. The fact that Al Sharpton, Tyler Perry, and BET were all pissed off by Macgruder’s use of Huey, Riley, Grandpa, Uncle Ruckus, and all the other characters as vehicles to call out influential black media personalities means he must being doing something right. 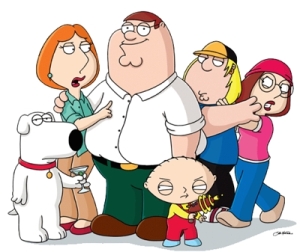 If thousands of years from now, social scientists want to know what life was like for the average American family in the early part of the 21st Century, Family Guy may be the best representation. As much as you may hate to admit it, you know it’s true. There’s the overweight, media obsessed father; the smug, sexually repressed wife; the simple, socially awkward teenage son; the insecure, promiscuous teenage daughter; and the completely out of control, mostly ignored toddler. Okay, maybe this isn’t exactly the dynamics of your family, but there’s no doubt you know at least one family that does fit the bill. Seth MacFarlane’s clan from Quahog, Rhode Island has gotten a lot of comparisons to another FOX cartoon family, but Peter Griffin’s household did do something before that other show. Family Guy garnered the first Outstanding Comedy Series Prime-Time Emmy nomination (2009) for an animated program since 1961.

Back in1997 who could have predicted that a prime-time cartoon about the ridiculous antics of four foul-mouth elementary school kids would go on to win four Emmy awards, get made into a blockbuster feature film, and single handily turned the fledgling Comedy Central network into one of the most successful cable channels on the planet. If you asked South Park‘s creators Trey Parker and Matt Stone, they probably would have said global domination was always inevitable. That’s because the college friends’ animated creation was something that had never been seen before. Parker and Stone’s dark social commentary equally mocks liberals, conservatives, celebrities, average Joes, rich people, poor people, old people, young people, gay people, straight people, religious people, atheists, and every race, gender, & profession. Basically, everybody’s fair game. The show’s blunt take on the hypocrisy in American culture hasn’t gone without constant controversy, but after 15 years on the air South Park is still one of the most authentic artistic reflections of what’s wrong with all of us. 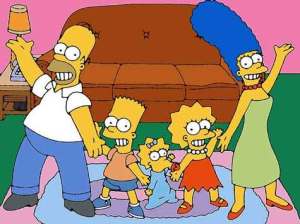 There was never any question as to which adult-themed cartoon would land at the number one spot. Matt Groening’s brilliant satire of middle America is unquestionably one of the most celebrated  television series of all time. The Simpsons is a winner of 27 Emmy Awards, holds the record for longest-running prime-time American scripted series, and was named the best television show of the 20th Century by Time magazine. Homer, Marge, Bart, Lisa, and Maggie started as characters on sketches for The Tracy Ullman Show in 1987. After the success of the shorts, FOX decided to extend the Simpsons’ hilarious predicaments into a full 30 minute show, and as a result the channel that was running a distant fourth place to “The Big 3” networks became a powerhouse.

The Simpsons isn’t just a tv show. It’s a phenomenon; grossing billions of dollars in merchandise sales and literally inventing an entire lexicon of popular catchphrases (“d’oh!”, “eat my shorts!”, “ay carumba!”, “why you little!”, “don’t have a cow man!”, “mmmmm (insert food)”, “exxxxcellent”). Oh yeah, the show is also just responsible for revitalizing the entire concept of prime-time animated programming which means most of the shows on this list probably wouldn’t have even been greenlit if it wasn’t for The Simpsons. To borrow a line from supporting character Comic Book Guy: Best…Adult Animated Show…EVER!

Top 10 Movie Smashes of the Summer

One thought on “Top 10 Animated Shows for Grown Ups”