Fisher Kay doesn’t really care what you think about him. Go ahead, call him angry, weird, lame, emo. It doesn’t make a difference to the young rapper whose first two mixtapes, Free Fisher and Holiday (both released in 2012), are explicit portraits that delve deep into the struggles of teenage angst. His lyrics are brash. His music is dark. And his persona is a little unhinged. But that uncanny combination reveals the true secret life of the American teenager. Plus, it’s hard to ignore that this wild kid can flow.

Whether “Fisher Kay” is just an exaggerated character or a real representation of the emcee born Keenan Park is a question that may not be that relevant. The fact that Fisher invites us into the inner thoughts of today’s youth is the true value of his work. Traditionally, the story of the anxious adolescent has been narrated by adults reflecting back on their younger days. Here, the Fitchburg, Massachusetts native steps up to the mic and presents the world as seen by an actual teenager who’s bright enough to brood over his problems, but still too young to understand how to solve them. Youth personified.

Fisher’s music in many ways represents youth culture in 2012; wired but yet detached. His vain peers may deny it. Parents may denounce it. But, love it or hate it, you have to recognize it’s unapologetic rawness. And in the near future you may not be able to avoid it. So you might as well get to know Fisher Kay now.

Yohance Kyles: How did you come up with the name Fisher Kay?

Fisher Kay: Well, when I was thirteen, it kind of turned into an alter ego for me to take on when I rapped. I picture Fisher Kay as an old lonely fisherman who lived in a small hut on his fishing dock, and he would tell all the neighborhood kids stories of his younger years. A lot of people think the “Kay” is for Keenan, which is my real name, but it actually means kid. But, the name is because life is like fishing. Sometimes you get a real nice and lucky catch and it’s good, or sometimes you just don’t catch anything and it sucks. You know what I mean? You never know what’s gonna happen.

YK: What inspired you to start rapping?

FK: I can’t really say one thing inspired me. It was a lot. I was always really creative. I used to draw a lot. And over time, I started to take a bigger liking to music. I always have my iPod with me. I listen to music every day. I was pretty good with computers, so after awhile I kind of realized I could make and record my own music myself with my computer. I wanted to be the guy behind the mic telling stories instead of listening to another guy’s. I make music that I like to listen to. I remember around the time I started making music, all I was listening to was [Eminem’s] The Slim Shady LP.

YK: You’re also a producer. Do you have any formal musical training?

FK:  Not at all. I took probably like 4 or 5 guitar lessons because I used to want to play, but I sucked. Asides from that, nope.

FK: I’d describe my sound as peculiar. It’s different than most rappers. I have a lisp and a weird voice, but it works for me. I guess it’s kind of an angry teenager sound. Which isn’t bad, that’s me. I’m honest in my music and just talk about whatever is on my mind at that moment. If I had to pick one word to describe my sound, I’d pick “unique”.

If people hate on you, ignore it. Do yourself, don’t be what someone else wants you to be just because it makes them happy.

YK:  What would you say is the main message you’re trying to express in your music?

FK:  My main message is just like, be yourself. Do what you want to do and what makes you happy. If people hate on you, ignore it. Do yourself, don’t be what someone else wants you to be just because it makes them happy.

YK: You’re content could be considered rather dark for a teenager. Are you concerned that some of your more controversial lyrics will turn off or offend potential listeners?

FK: Not at all. I mean sometimes I go back and listen to some songs and be like, “Well, maybe that was a little much,” but, then I remember that I was probably pissed when I wrote it and that I feel better now. People choose what offends them. People tell me I suck at rapping all the time, but I don’t let it get to me. If someone’s offended about something, it’s because they let it get to them. If someone’s gonna get turned off by my lyrics then they were never a fan in the first place.

YK: On “Sand Banks” you say “I’m so hungry to get famous. I’m starving”. The rappers that have reached a high level of fame have had, to a certain extent, water down their music to appeal to a larger audience. Do you think you’d ever be willing to compromise parts of your sound or persona to reach that level of fame?

FK: To some point, yeah. But not because I have to or anything. It’s just that if I ever get that famous or big I won’t have as many dark issues to talk about anymore. I’ll be happier. You feel me? I love looking at how artists grow. Maybe they start off really pissed off and dark, but eventually they get happier and make happy music. I feel like my music already could appeal to a pretty large audience, but that audience will get larger as I grow and mature as an artist. 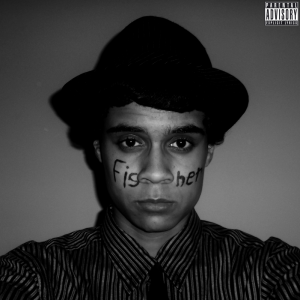 YK: You produced your entire first mixtape yourself, but for your second mixtape you worked with other producers. Why did you decide to add other people’s production for Holiday?

FK: Producing is cool but, I wanna be a rapper not a producer. I’ll produce some tracks of course, but I didn’t want it to be my main thing. So, for Holiday I was like, I want this tape to be dope and really show me off as a rapper and tell my stories. And I wanted to be able to write doper lyrics without having to worry about having beats to make as well.

YK: I think that Eminem/Tyler The Creator comparisons are going to be inevitable. How do you feel when someone says you remind them of other rappers?

FK: Oh God, haha. I get those comparisons so much, which is cool I guess because both Eminem and Tyler are huge influences to me. I don’t take any offense to it. Everyone has an opinion, which I respect. So, if someone thinks I sound like another artist, that’s their opinion. But, at the end of the day, I’m still Fisher Kay.

YK: Can you explain the idea behind the Lame Kids Collective?

FK:  Lame Kids Collective is basically me and my friends giving ourselves a name and identity. Some of us do music. We all have a niche within the group sort of. LKC would feel weird if one of us was missing. The name comes from people hating on me and my friends for no good reason. And if someone is disliked, in slang, you’d call them, “lame”, right? So, we’re redefining lame and making it kind of our thing. Like being lame has a whole new definition for us. We’re making it a good thing for us. It’s hard to explain. But in the end, it makes us the Lame Kids Collective. 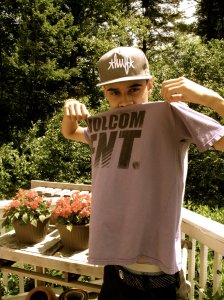 FK:  The music scene in Fitchburg is pretty good, honestly. We’ve got a lot of good rappers and producers and just musicians. A lot of dreamers and a lot of people that want to and are doing good things with their music. I love Fitchburg. Shout out to all the other rappers, producers, bands, etc. coming up with me!

YK: What artists have inspired you and who are you listening to right now?

YK: What’s your opinion on the current state of Hip Hop and mainstream music in general?

FK: Hip Hop is doing pretty well right now actually. It’s making a comeback. A lot of dope artists are coming up right now. Mainstream music is eh. I guess it’s cool for the people who like that, but it’s personally not my thing. I don’t listen to the radio. I like what I like, and other people like what they like and I leave it at that.

I always said that if making music started to feel like more of a thing I have to do opposed to something I want to do, that I’d quit, but it hasn’t hit that yet and I hope it never does.

YK: What’s the hardest thing about being a “teenage rapper”?

FK: Balancing it with school and my social life. I still do very well in school though. I stay on the honor roll. Being a teenage rapper made me hit a weird kind of social area. It’s cool, but awkward a lot. But, I still do it and love it. I always said that if making music started to feel like more of a thing I have to do opposed to something I want to do, that I’d quit, but, it hasn’t hit that yet and I hope it never does.

YK: What’s next for Fisher Kay?

FK: What’s next for me? I’ve got my first music video for “Relentless” off of the mixtape I’m working on now that I hope I can have released for the beginning of 2013. Other than that, I don’t really have anything else big planned besides trying to collab with more artists and push my music so I can get heard more.

Ready For The Big Leagues: Q&A with Leo Simone

Jack of All Trades: Q&A with Just Cletus