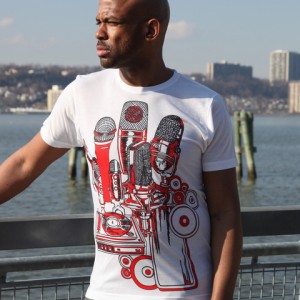 For over 3 decades urban clothing has been creeping its way into an advanced position in the fashion industry. From Karl Kani and Russell Simmons parlaying their respective Hip-Hop influenced brands to multi-million dollar businesses to Pharrell Williams and Kanye West adding a taste of street design to high fashion lines by Louis Vuitton, Seventh Ave and 125th Street grow closer together by the moment.

Urban FLRT (Freely Living Real and True) is one rising brand out of Harlem that is ready to continue pushing urban wear to the next level in fashion. The pop culture-inspired line is making waves because of its stylish designer t-shirts that will never need to be discarded.

Urban FLRT implements an innovative new creative process called “dye-sublimation” that causes the fabric to absorb the dye rather than the ink setting on top of the shirt. The digital printing produces tees with vivid colors that never fade or peel. That means when you purchase a product from Urban FLRT you can wear that garment for life.

The brand’s self-described “street couture” style can be viewed as more than just clothing. Urban FLRT’s designs are wearable art that reference the music, attitude, and sentiment of life in the city. While extremely fashionable, more notably the shirts serve as canvases that the designers imprinted with their inventive voices. With fashion as the outlet, Urban FLRT is sharing the spirit of Harlem’s esteemed culture with the rest of the world.

Check out the Urban FLRT promo video and the background video “Urban Abstract” for BlackOutEndeavors:

Is 3-D Printing The Future of Art?

Fashion With A Greater Function: Q&A with Designer Tamara Leacock