There is a certain difficulty inherent in making a contemporary feature about Superman. The character is just as important to the Fanboys as he is to average citizens who have never picked up a comic book, much less read one. The majority of the public considers him as American as baseball and apple pie, and there are those who can quote chapter and verse on his origins, history and importance in the culture’s lexicon. There is an exchange in the film over the meaning of the iconic red and gold symbol on his chest. We all know that that symbol is for Superman and he belongs to us all. Man of Steel is a somewhat challenging reminder of that fact.

The challenge of a Superman movie is to present those tropes that we all know: “strange visitor from Krypton”, “powers and abilities far beyond those of mortal men”, “a never-ending battle for truth, justice and the American way” in a manner that is both contemporary and nostalgic. Man of Steel addresses the challenge by assembling somewhat of a dream-team in the personages of Zack Snyder (director), David Goyer (screenwriter, story) and Christopher Nolan (producer, story). And, ultimately, they succeed.

Snyder’s Krypton straddles the popular interpretations of Superman’s home planet, combining the 1940’s era pulp, super science with the 1990’s concept of a cold, logical society and a pair of forward-thinking, yet ultimately patriotic citizens. In tandem, yet in opposition to Russell Crowe’s Jor-El is Michael Shannon’s Dru-Zod. General Zod is portrayed as the most compelling of antagonists – in his own mind, he is not a villain at all. Rather, he is a patriot, a true son of Krypton who worked and sacrificed to preserve a certain way of life, only to be betrayed and imprisoned by his own people.

In regards to our hero, it is here that Man of Steel is most successful in its difficult charge. Whereas Brandon Routh embodied a nostalgic tribute to Christopher Reeve, Henry Cavill embodies Superman. As the story unfolds, we believe that this character was raised with strong values by excellent, adopted parents. We believe his childhood difficulties, as emerging abilities emphasize his “otherness” in comparison with his peers. We believe his journey, leaving familiar surroundings to find his place and acting as an anonymous guardian angel. We believe his discovery, as revealed origins commit him to being the symbol of hope that the iconic, big, red ‘S’ implies.

There is a poignant moment in the film’s denouement (and no, I won’t spoil it, Fanboys) that will likely have us in discussions over his actions for some time. And ultimately, Man of Steel makes us believe that a man can fly. It’s been awhile since we have had that feeling, and it’s very welcome. 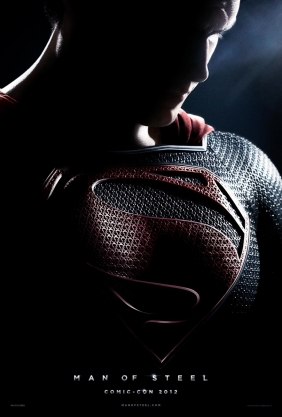 Man of Steel is now available in the theaters nationwide.

For more info about Man of Steel click it

Check out the trailer for Man of Steel:

5 thoughts on “Grounded, But Soaring: Man of Steel Review”