Gabriel G. D. Vargas was born with music in his blood. As the son of former Latin band member Daniel Vargas, the sounds of his Puerto Rican heritage are embedded in his DNA. So it was only a matter of time before the New York native turned toward creating his own music.

After overcoming troubles with the law as a teenager, the aspiring artist took on the moniker of Mr. Vargas, and by the age of 20 he was appearing on mixtapes. Another setback led to Vargas serving a two-year sentence in state prison, but his release in January 2012 was the catalyst to his permanent turn toward Hip Hop.

Vargas eventually hooked up with production team The Vamp. His discography now includes tracks with Jim Jones, Troy Ave, and Mysonne. He is now currently working on releasing a full project.

In DZI: The Voice‘s latest interview, Mr. Vargas discusses his upbringing, connecting with NYC rap stars, his favorite albums from the city’s emcees, and more.

Mr. Vargas: My family and close friends was always involved with music. I started rapping at 13.

YK: How was life different for you growing up in upstate New York as compared to NYC?

MV: I grew up in Bronx, Queens and upstate New York. It affected me to see that racism still exists, and my family struggled more financially then we did in the city. It also showed me a different way of life and ways to make money and invest outside the streets.

YK: What first attracted you to want to get into making music?

MV: I grew up playing piano, break dancing, and singing. My father was very musically inclined.

YK: You have faced a lot of personal tribulations throughout your life. How did those experiences impact the music you make?

MV: It’s made me work a lot harder and take this music game more seriously. It also has made me wanna take music as a platform and advance to bigger platforms to bring awareness to Hispanics and minorities’ struggles.

YK: How did you first connect with Jim Jones?

MV: I had Jim Jones as a vision, and DJ Mike Sessions from Big Dawg Pitbulls made the connection.

YK: Was the “Ayyayi” song inspired by real events from your life?

MV: All my music is.

YK: How did the “Get The Dough” track with Troy Ave and Mysonne come together?

MV: We reached out to Troy Ave and put the records together. I did a showcase with Mysonne. He liked the record and jumped on it.

YK: If you could only listen to 5 Hip Hop albums by New York artists for the rest of your life, which ones would you pick?

YK: A lot of rappers have decided to join reality TV shows. What you ever consider doing reality television?

MV: Anything to change my life.

YK: What’s next for Mr. Vargas?

MV: An EP with a few more singles, some acting, and my own showcases. 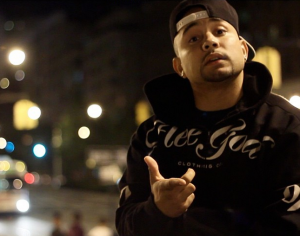 King of the Kounty: Q&A with Hip Hop Artist Ya Highne$$