Toronto based singer-songwriter Veronica Domingues is an artist that uses the sounds of the world as part of the her sonic brand. Growing up in a household that exposed her to the Fado and Pimba styles from Portugal gave her a musical foundation for a future career in the recording industry.

“I grew to love Portuguese artists like Amalia Rodrigues, Rita Guerra, Santa  Maria, Mariza, Ágata and Quim Barreiros as well as Brazilian artists Carrapicho, Gera Samba, Daniela Mercury, Ivete Sangalo and Kaoma,” says Domingues. “I always enjoyed the sex  appeal and sensual language they infused into their music. I tried to incorporate some of that into my song ‘Eu Quero’ which was somewhat of a tribute to these Latin genres.”

While Domingues loves to mix in the music from her parent’s home country, she has also embraced the styles cultivated in North America. Gifted songstress like Shania Twain and Whitney Houston served as influences, and she later discovered the Toronto Hip Hop scene. It was her appreciation for the culture that eventually spawned her upcoming debut Hip Hop Soul EP Just Chill.

The lead single from Just Chill is the smooth, jazz-infused track “I Get High” featuring C-Flowz. The title might suggest Veronica is sharing her fondness for a certain herbal remedy, but the 24-year-old vocalist insists the song is touching on her affection for another subject.

“Obviously when you listen to it, you’re going to just think it’s about something else,” states Domingues. “But the lyrics are about how music elevates your mind state. When you’re sad, it has the power to change your mood. It’s about music making you feel really good.” 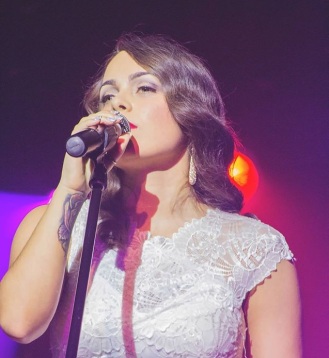 Top 10 R&B/Rap Collaborations Of All Time

One thought on “New Music: Veronica Domingues & C-Flowz’s “I Get High “”