Like the boy who cried wolf, Black Zheep DZ’s public proclamations have people paying attention. But the 21-year-old Hip Hop artist differs from the Aesop’s Fable character in that he is not ringing any false alarms on the pending damage he plans to inflict on the music world.

Fresh out of Baltimore, Maryland DZ brings a unique perspective that takes listeners into a haze-filled musical realm. His latest effort is the 16-track project Refugee sponsored by Mishka NYC. Songs like “Whachu Sayin'”, “Cable Man”,  and “Dream On” combine esoteric and reflective lyrics with ghostly production.

DZ connected with DZI: The Voice for a Q&A about his new album, opening for Schoolboy Q, and more.

Black Zheep DZ: As an artist, I would say when I was like 12, rapping with my cousins that lived over West. I used to record stuff at their house with them, and I’d bring it to middle school with me to play it on a CD player for my classmates and homies. [laughs] Everybody was liking it though. We used to have rap battles in the back of the school too. But I didn’t really start taking myself serious with it til I was in the 11th Grade in 2010.

YK: You started off as a dancer. Why did you switch to rhyming?

DZ: I started club dancing around the same time I was trying to rap. I always did both cause I had the same confidence and mindset for both. I just felt like everybody looked at me as being too young when I was trying to make a rap career, so I just made a name for myself dancing. I had this group called “Misfits” with my homie Whyteboi, who now dances for M.I.A. We starred in Rye Rye’s “Bang” video when I was like 15 years old. That was a cool experience.

YK:  Do you remember the first rap you ever heard? What was it about?

YK: How did you come up with your stage name?

DZ: I came up with the Black Zheep part of course from feeling like a black sheep. But not only that, I kind of made it my own word by combining the word “zeev” (meaning “wolf” in Hebrew) and the word “sheep”. Zheep means the sheep in wolf’s clothing, instead of the wolf in sheep’s clothing, which is usually a bad thing.

So Zheep is to be the good guy, but still being the dude not to mess with. You know? Like the good villain and just being the sheep that bites and runs just like the wolves cause he was raised with them. DZ just came from being called Deezy in my city. I just wanted it to be two letters, so I changed it to DZ.

YK: How did you connect with Mishka?

DZ: They ended up picking up on my material and finding out about me from my “Whachu Sayin’” music video. Then we just got the ball rolling with them.

YK: Why did you decide to name your most recent project “Refugee”?

DZ: I decided to name it “Refugee” because the project is mainly based off of the problems that other people and myself flee from in the world today. Because even if we’re physically free, we’re still not free at mind. We’re still refugees trying to run away from everyday problems or situations which is why the intro and outro tracks sound and have the concept the way they do.

Of course, I have some tracks that are just on there and don’t follow the whole concept, but for the most part a lot of them do, such as “December”. That song is about freezing up and falling for a girl when you first see her which is something a lot of dudes are ashamed of talking about. They run from the idea of it. They’re just talking about, “I fucked this bitch or took this bitch”. Sometimes that’s cool, but I just see it different than that a lot of times.

YK: On “Whachu Sayin'” you say “I never thought about a racist until I was treated like a felon by them knockers.” Was that line based on a real experience?

DZ: When I said that, yeah it was the truth, because where I’m from police will stereotype us just because of our image or skin color. They treat you like you’re a killer or something when there are way bigger problems. That’s something a lot of my homeboys and I have been dealing with for years.

YK: You have a single “Dream On.”  What do you dream about for your life?

BZ: I dream about just being successful in anything I choose to take on and being comfortable after doing so. I also dream about making sure the people I’m surrounded with are doing the same, so that I can enjoy it with everybody who’s working hard for something or being an asset to it in their own ways.

YK: You recently opened for Schoolboy Q. Did you get the chance to chat with him?

DZ: Yeah I opened for him, it was a cool, humbling experience. I didn’t get the chance to speak to him like that. We exchanged a few words though, nothing too heavy.

YK: If you could pick any three artists to collaborate with right now who would they be?

DZ: I would say, The Weeknd, Tyler The Creator, and PartyNextDoor. There’s probably a little more. Not too much, but that was just a few off the top of my head that I know I’d like to work with.

YK: You’ve incorporated Egyptian symbolism into your art. What’s your take on the idea that some people associate symbols from Egypt as part of the occult or the Illuminati?

DZ: Yeah I incorporate Egyptian symbolism in my art, but I think the people who associate it with Illuminati just don’t know anything or haven’t read their history and some just have an ignorant mind. If they really knew pyramids were never a bad thing… it was said that Hebrews built them.

I know a little more; I’m just not gonna get deep into it. Another thing though, I find triangles as a distinct shape. It’s an eye catcher, so I just let people believe what they want and let my music tell them better.

YK: Jumping off your song “Cable Man”, what are your all-time favorite cable TV shows?

DZ: I like Boondocks a lot! I like Adventure Time. Of course, I like Martin and Fresh Prince too. I’ve seen every episode of both. I’m not too big on TV shows. I’m more of a movie guy.

DZ: You can expect more visuals coming very soon, more singles on the way, another project in the works. I have a lot to be on the look out for. Everyone just gotta keep up with me. Very great things are to come soon. 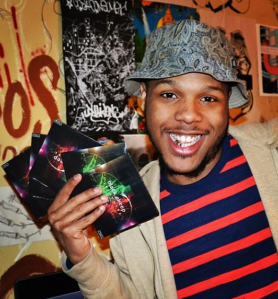 For more info about Black Zheep DZ click it