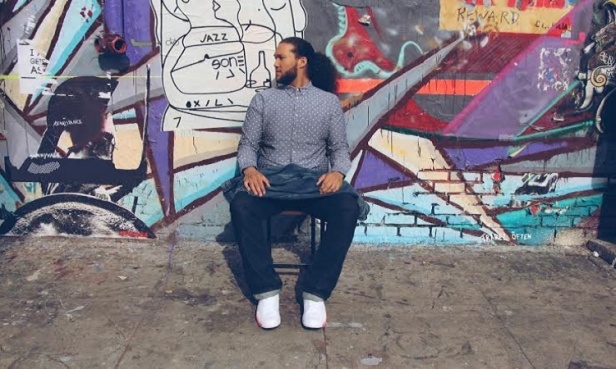 Music is capable of to taking listeners to amazing places both physically and emotionally. A prime example of that power is displayed in Rippy Austin’s first album The Journey. Over 10 tracks, the artist/producer introduces himself and his immense talents to the world while also creating a vibrant setting for his sounds.

The 23-year-old world traveler wrote and produced the entire project. Childhood friend Robert Casey Gaul came along as well, serving as The Journey‘s co-producer and engineer. The two musicians mix elements of Hip Hop, Jazz, and R&B for smooth songs like “Never Say Never”, “Take My Hand”, and “Genevieve”.

DZI: The Voice caught up with Austin to discuss his history, his travels, and of course his music.

RA: Honestly I was about 5. I just have a vivid memory of being in Sunnyvale, California sitting out on the front of my house singing The Fugees’ “Ready or Not”. It’s weird. I was consciously aware, even at the young of age, that I didn’t sound bad. That young, I really liked that song musically, harmonically. Progressively since then I found myself branching out more and more dabbling with rapping and then into music production.

YK: How did growing up in the San Francisco Bay area influenced you musically?

RA: The music scene in the Bay is one of the most unique and original scenes in the world. It’s the birthplace of independent artists/music. I just remember growing up thinking the artists in the Bay were the celebrities, equivalent to a Jay Z or Diddy. To me these young entrepreneurs were just as big if not bigger! It forever enriched in me that you don’t have to stick to anyone’s script of what it means to be successful.

The cool thing about my upbringing until now is that I’ve lived and have spent time in many different places. My family moved to Indianapolis, Indiana so we got a completely different vibe of life and culture out there. We’re very fond of Chicago, having spent a lot of time there as well growing up.

I lived in North Carolina, Los Angeles, travel to New York often. Being so heavily into music, all these places offer something different, and I’ve learned from it all. It’s pretty cool because that mentality has enabled me to never be boxed in as far as what I can listen to or for that matter, create!

YK: Why did you take on the name Rippy Austin?

RA: When I was kid my brothers (B9 and Tazzo) just started calling me Rippy [laughs]. I guess it was them messing with me, but it stuck. Over the years it transpired, but I added on my middle name Austin and there you have it.

YK: How did you first connect with Robert Casey?

RA: I met Robert in Indianapolis in middle school. We used to live up the street from each other. I had no clue he was into music until later. We went to different high schools, so a good time went by that we hadn’t been in contact. I just remember coming back to Indianapolis one year and hearing him play bass and drums; musically, the chemistry we had I knew was something special. That’s a talented dude.

YK:  You were very hands-on with almost every aspect of The Journey. How did you learn your production and design skills?

RA: I grew up in a very artistic family. My music influence comes from them – my brothers, my dad, my sister. I was about 11 or 12 and bugged my brothers to teach me how to make beats. That’s when I started the production side of things. I’ve been an artist as long as I can remember – drawing, painting. When I went off to college in North Carolina, I was introduced to digital design and started to develop my own sense.

YK: The Journey is a blend of several music styles. What attracted you to want to incorporate Hip Hop, Jazz, and Soul into your music?

RA: Again, I’ve always grown up listening to an array of sounds. I mean my pops would have me listening to Jazz, George Duke, Herbie Hancock (I’m talking at 10 years old). On the other side, my brothers would have me listening to classic West Coast gangster/mob music – E-40, JT the Bigga Figga, Messy Marv, etc. Then I would take a ride with my sister, and we’d be listening to Common’s “I Used to Lover H.E.R.” or Erykah Badu and Dwele. I had no choice but to be musically mixed up [laughs]. All of those sounds and influences soak through the stuff I make now.

YK: On the track “Never Say Never” you say your life just kind of changed out of nowhere. What was the turning point that led you in the direction you’re on now?

RA: Man that’s a whole book within itself explaining that [laughs]. But in a nutshell, I transformed from a non-focused, at-risk high school student who never imagined even applying for college, never envisioning myself past high school at all, to fast forward and now I am a graduate of one of the finest universities in the world, USC.

I went through a complexity of challenging events in the ladder years of high school that made me wake up. It sounds corny, but I felt myself change over night. Once I had that fresh start, I just got it right; more and more every day.

YK: What is the significance of the project’s artwork?

RA: The project’s artwork signifies a journey, a curious one that people may be skeptical of, including myself. But when it all boils down, I’m reaching for the stars and never looking back. The bike signifies going places, as far as I want to go, as big as I want to dream. I’m just going! It’s very optimistic – the whole idea behind the art, the music, and the journey I’m taking. The Journey is truly music, a lifestyle, and a story all intertwined.

YK: You’ve had the chance to travel all around the world. Which local music scenes have stood out to you? Why?

RA: There’s so much talent all over the world, seriously. But I’ve been saying this for a long time now, I feel Los Angeles’s music scene is the most creative and interesting (and not the signed major label scene). I mean on any given night you can go to a local show and hear mind-blowing material from someone who works at a Target. It’s such an eclectic scene. I think that’s what I admire most. You can be who and what you want artistically ,and it’s ok.

I don’t think it has the same strict rule as like the New York Jazz scene or the club influence like the Atlanta market. It’s just raw talent from young kids that love what they do. It’s inspiring man, glad that I’m coming up in it, witnessing, practicing. It’s cool! I’m also fresh off a trip from Europe (Paris) and say they got some stuff over there!! Europe as a whole, they’re creative and genuinely love music. It’s like they live to consume art, stuff that’s on a higher frequency. Good vibes!

YK: Who are some of the artists that have influenced you?

RA: Way too many to name, but my favorite musician by far is Robert Glasper. I’ve been a true fan since ’08. His chordal progressions, voicings, free playing really intrigues me. Not to sound cocky or to compare, but I hear a lot of myself in his music. I think that’s why I like him so much. I swear some of the same chords I play, he plays, of course much better [laughs].

I can go on for days, but Common, of course Dilla, San Quinn, Mos Def, Talib, Snoop, Dwele, OutKast, especially 3 Stacks (that dude I don’t even have words for.) Really love Kendrick’s stuff and have for a while now. DJ Battlecat was a huge one for me growing up as well, big part of why I started producing.

YK: If you could only listen to five albums besides your own for the rest of your life, which ones would you choose?

RA: I’m weird man. I don’t think I have the patience to sit back and listen to albums anymore. Maybe if I’m on a road trip or back in the day when I used to play video games listening non-stop. But I’d have to pick Jill Scott’s Who is Jill Scott? and Beautifully Human. The Kendrick Lamar EP. Robert Glasper’s In My Element. Lastly, I’d say OutKast’s ATLiens. That’s a cold line up!

YK: If your weren’t making music, what career do you think you might have pursued?

RA: It’d probably have something to do with traveling, cities, or maybe marine life [laughs]. I honestly don’t know what I’d do without the arts, but these things interest me just as much. I love to travel. It’s the best way to learn, to expose your mind to different things.

YK: What’s next for Rippy Austin?

RA: You know what, I just want to be free. I’m not gonna say “Yo, big things coming son…big things” [laughs]. I’m just doing me man, just living life and having a smashing time doing it. I just want to keep God first, be with loved ones, and make amazing art that hopefully has a positive impact on the world!

Check out Rippy Austin’s The Journey: