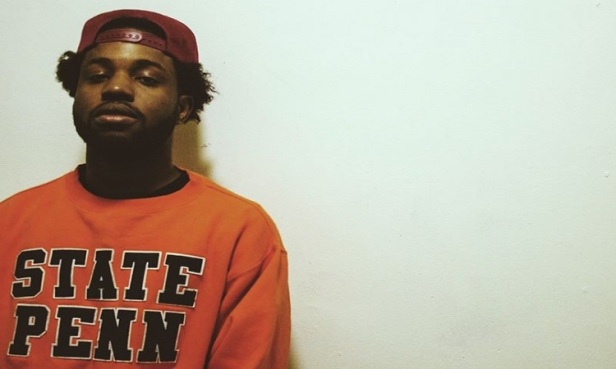 Almost every area of New York City has produced a representative in Hip Hop culture. From Brooklyn to Harlem to Staten Island, NYC rappers have repped their locale to a global audience. There is one section of the city that is still looking for a face to carry the torch for them – the Lower East Side. Rising artist Lurkavelli is stepping up to the plate to be the voice for the LES.

Lurkavelli and his NEW LURK CITY collective are heavily influenced by their hometown and its music. While 90’s era New Yorkers serve as his inspiration, the 23-year-old rhymer is bent on creating a new take on East Coast Hip Hop. Part of that reinvention includes Lurkavelli joining forces with producer Young Bodybag for the upcoming 7-track project Last Call.

As Lurkavelli prepares to release his EP, he took the time to chat with DZI: The Voice about his singles, New York Hip Hop, gentrification, and how he got his name.

Lurkavelli: Well, I reinvented/found “my sound” not too long ago; a little before my boy Young Body and I recorded “Keep Your Circle Tight”. That was like May of last year. I say “reinvented,” because I ain’t gonna lie, I was on that tomfoolery rap, making mad twerk music and strip club anthems on some south shit (when I was doing it, it was tomfoolery because I was jus being funny), but now I want to actually tell stories in my raps.

YK: Growing up in New York City what artists did you listen to the most?

L: I bumped a lot of Dipset to the point you couldn’t tell me I wasn’t part of the set [laughs]. I also was feeling G-Unit – all of their first studio albums and majority of their mixtapes. Til this day you can catch me bumping Supreme Clientele by Ghostface Killah. I like his other work, but that album influenced me more, that and Cam’ron’s Confessions Of Fire album. So Dipset, G-Unit, Ghostface, and I can’t forget my guys Ye & Nasty Nas. Oh yeah, I didn’t only listen to Hip Hop. Majority of the music I listen to is R&B – real chill – and it helps me please the ladies, helps me move how I move.

YK: How did you come up with the name Lurkavelli?

L: The name does not really mean too much. Basically my team name is “New Lurk City”, and I can honestly say we made the phrase “lurkin” cool. We switch the meaning for it. A “lurk”  is an event/party/chill spot. “Yo we lurk that” is we took that. “We lurked the event” is we got in without RSVP, and “we lurkin” is we chilling. I guess I chose that name to stamp that in the concrete.

YK: On your latest single “The Dough” you spit a rap without a chorus. Was that a freestyle or a written verse?

L: Honestly half and half. Certain parts are freestyle. The beat was too smooth that I couldn’t stop flowing [laughs]. The verse was supposed to be shorter. Shout out to Young Bodybag, but that was just my verse I released. There’s actually two more verses from my bro Buddha Gold. The record was his idea. You could check out his verse when we performed it live at some venue in the LES.

YK: Was your previous track “K.Y.C.T. (Keep Your Circle Tight)” inspired by a real-life experience?

L: Yeah, I think the situation that happened in the Lower East Side inspired me to be on somewhat of a storytelling rap. Recently, my block was on the news, because allegedly there was a cocaine ring. From what the news said, about forty-five dudes got knocked throughout the Lowa. A few dudes I knew, a few I didn’t. When I heard the report I felt the Lowa needed someone to speak up and put us out there, get our story told. Ya feel me?

YK: How did you first connect with your producer Young Bodybag?

L: We actually met when he worked at a little streetwear boutique, then I ran into him when we both worked at some retail spot. We knew each other for a minute. He was the one who actually got me back into rap. He sent me that beat for the record you now know as “KYCT”, and things started bubbling. We then decided we need an EP. He also saw my vision, and I saw his, so it was easy to work with. He’s producing majority of the project of course.

YK: What’s the status of your upcoming Last Call EP?

L: It’s finished right now, but you or I will never know where my next move’s gonna take me. I could release some visuals and grab a whole new fan base or more people who want to work with me. But for right now it’s finished, just got to record the finishing touches.

YK: What’s your take on the ongoing debate about the current state of New York City Hip Hop?

L: I honestly don’t really care too much. I’m going to make the music I want and suggest everybody else to do the same. Whether it sounds like traditional Hip Hop or not. I don’t really care for nostalgia rap. The only ones I really dig is A$AP Nast and Joey Bada$$. I feel like people are forcing it, because they expect people to hear it. I don’t know why. As for the radio, yeah I agree they DO NO SUPPORT artists’ from New York music who are getting on (not just anybody who’s rapping, people who actually bubbling on the underground scene). Hey, fuck it right. I got a plan. I’m not depending on radio. 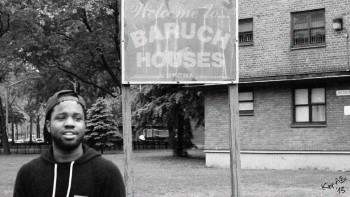 YK: Just like in other areas of New York, the Lower East Side has undergone gentrification the last 10+ years. Do you think the influx of luxury condominiums and new residents affects the art scene in the neighborhood?

L: Hell yeah, it affects more than just the art scene. It affects people’s livelihoods. Rent is getting raised, people are being forced to move out, and across the street from my block (Baruch Housings) they’re building one. They’re changing the streets and playgrounds. Stores are pumping up the prices, because they changed an elementary school to an early college, high school. They feel the white kids who attend got a lot of money. Things are getting wack, and being that I am from the LES people already assume I’m a trust fund baby or born with a silver spoon in my mouth. Another reason this music shit gotta take off, so people can hear not just my side, but every kid’s, who was raised around me, side of the story.

YK: Do you express yourself through any other artistic mediums besides music?

L: Hell yeah, I’m from New York. You can’t just rely on one hustle. I’ve taught myself everything. My boy laced me with a camera. I became a photographer/videographer (PowerUp2x). I designed streetwear, before I reinvented my music image (ERARENYC & 7DayWeekends In New York). That went smooth, but I didn’t have enough ends to continue making product. I’ve thrown events, etc. I have about six brands I’m retaining. Gotta get this money some how.

YK: If you were only able to listen to 5 Hip Hop albums for the rest of your life which albums would you choose?

YK: As a New Yorker, Derek Jeter’s place in Yankees history: Overrated, Top 10, Top 5, or Greatest Of All Time?

L: He’s eatin’. He got people to like him enough to put him in that position. I don’t even watch baseball, and I know who he is. He earned a GOAT status.

YK: What’s next for Lurkavelli?

L: New visuals I’m gearing up to release, then the project and shows. Hopefully everything comes together right and things can really take off how the team wants it. Also, expect to hear more from Buddha Gold and NEW LURK CITY. Shout out to GoldStandard Industries & NEW LURK CITY.

Check out the video for Lurkavelli’s “The Dough”: